In the last ten months we've covered 10,850 km of land by bike. During that time we've eaten too many ice creams on the Rein, gotten drunk with old Serbians, drunken fresh milk from Romanian cows, browned our teeth with the Turkish, ran from stone throwing kids in Jordan, argued with Egyptians, gotten laughed at by the Indonesians, saw weird festivals in Malaysia, smiled a lot in Thailand, ate too many noodle soups in Cambodia, scared people all over Laos, and learned to love the Chinese. After all this, we've decided that there is really nothing that we would appreciate more than a clean shower and a freshly made bed at home. But before we could stop ourselves.... 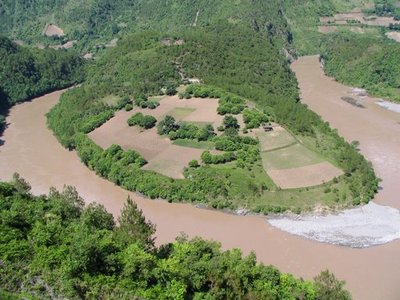 We decided to do one last good-bye stretch. So we chose to bike down a 340km river gorge. But this wasn't just any old river gorge. It was a special Chinese one. What made it so special and so Chinese was the river that dug it out. The Nujiang river is a huge, wild, twisty monster of a waterway. If you fell in, which seemed pretty easy to do as we biked along the steep path next to it, you would instantaneously be gulped down into the depths of it's madness. A big bummer for you. And there is no escape, the mountains rise up thousands of meters on each side, giving a very narrow and ruggedly beautiful view throughout the day. 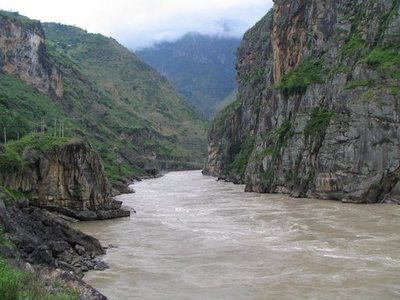 Despite the inhospitable surroundings, people live and farm is this gorge. Farmers, with goat-like balance, scale the mountainside to plant corn and beans. If they need to get to the other side of the river, they just attach themselves to a cable and come flying over to the other side. Wim was so enthusiastic about this concept, that some guy took pity on him and offered to help him over the river. It was a childhood dream come true! 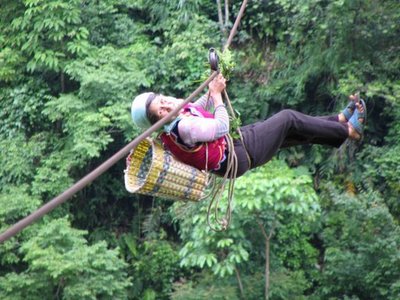 The people here have only just recently gotten a paved road. So it will surprise you to find out that it takes you 8 hours to cover the 340km by bus. And that is with a fast, out of control bus driver. So, ten years ago, this was all walking, horse riding territory. And in all of that remoteness, a big variety of cultures and languages developed. From village to village you see all different types of faces, customs, religions and food. There is also 25 percent of all of china's wildlife living along this river. Many a time I had to swerve for gigantic, weird looking caterpillars. We also saw big, colorful butterflies that flit around us throughout the day and heard strange bird calls ringing from the trees. 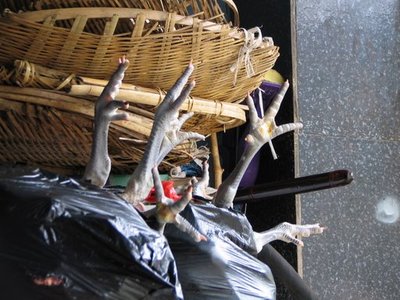 The downside to this region though, is that people do not eat their dogs. That meant that instead of lying peacefully on the dinner table where they belong, the dogs were out chasing us in packs. In each village the lead dog would spot us coming and egg on the others. Before we knew it, we would be surrounded by snarling, growling little monsters. However, after ten months of target practice, revenge was ours. We would just reach into our stash of big sharp rocks, and start bombarding them. And with immense satisfaction we would watch them whimper off towards home. 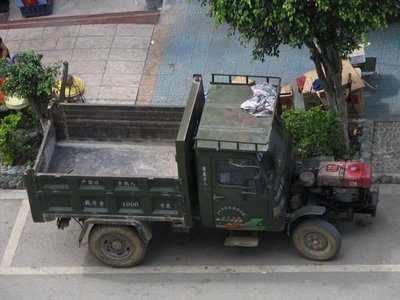 Why do dogs like to chase bikers? It is because these dogs live by the law of the Chinese road. That is, whoever is bigger has the right of way. So, if you are a truck, it is without saying that you go through villages at 80km per hour. If a dog or pedestrian gets in your way, all you have to do is honk. If you come to a red light... no problem, you are the biggest, so you just pass through with a loud honk. If you are backing up you don't even have to look behind you. Because of this, there are a lot of dog pancakes in China. So, when these dogs spot us, they are just venting anger for all of their squished relatives. It's quite sad really. 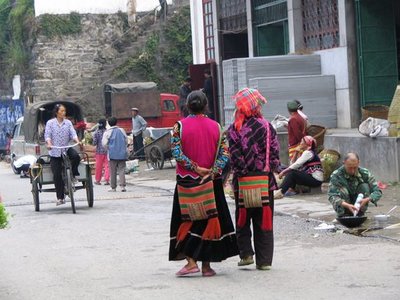 You may now be wondering where bikers fit into Chinese road rules. We were wondering that too when we first got here. When we were in a city, we would swerve for pedestrians, trying to miss them... as we would do in Belgium. But, here, the pedestrians would also try to swerve, trying to get out of our way. That often resulted in a near collision and a lot of trauma for the Chinese person that was almost run over by a big nosed, yellow haired biker. We therefore concluded that we were above pedestrians on the food chain. So now, when we see a pedestrian, we tighten our grip and head straight for them. If they still don't move, we have a 120 decibel horn to help them on their way. In doing things the Chinese way, everything runs a lot smoother. 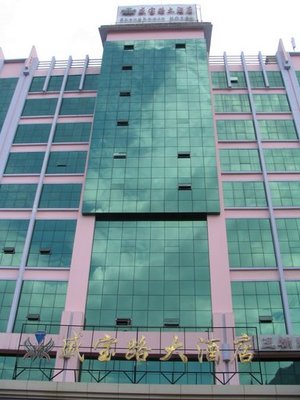 To celebrate and to recover from the moldy trucker 'hotels' of the last few weeks, we wanted to treat ourselves to something clean and fancy. So, at the end of the valley, we parked in front of a big high rise hotel with lots of SUV's parked in front. Pretty people stood all around, and I trudged in, full of sweat stains and grease, to ask for their executive room. Behind me, Wim was pushing our muddy bikes through the reception. After checking in, we shot up to our rooms to get cleaned up. Then we went downstairs to the reception to strut around in front of the reception ladies. We wanted them to know that we don't always stink. 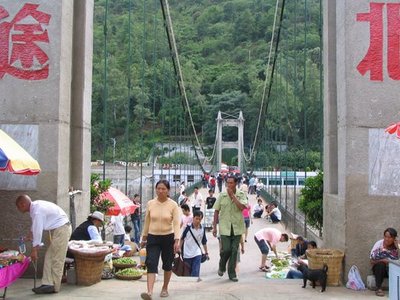 Now, we are getting to know Liuku and it's residence in our last few days. As we walk through the streets, locals practice their one word of English... "hello", and then laugh shyly. At night, we join the rest of the city on the 2km pedestrian loop around the river, which is decorated with waterfalls and gardens. People stand around grilling yummies, groups of people dance to music, and whole extended families wander around together enjoying each others company. I guess you could say that we're really taken with the whole Chineseness of it all.

And now, we're off once again to Kunming for the last leg of our journey.

Posted by amyandwim 02:36 Archived in China

You could have run over the caterpillar and had another caterpillar pancake. But I guess maybe you guys didn't really develop a penchant for caterpillars yet. I'm glad you are enjoying China. I couldn't see the video but I imagine it's you guys going in to the hotel lobby and the looks of the people around. Anyway, have a safe end of your journey and congrats on all your accomplishments!

I always find it very strange that people don't feel the need to create rules to organize their traffic in a safe, 'non-squishing' way. Don't they get tired or upset of all the honking?? I would. Maybe that's why I'm born in Belgium ;.)

So I cannot convince you to drive 'a little' further to Shanghai and see my friend with red hair? Or why not fly to the Himalayas where you initially wanted to go?
You achieved what you wanted anyway: a slow bike to Asia! Some trip to remember your whole life!!!

Great information shared here, I liked it very much and would be sharing this with others so that they can also take advantage of it.