The Dark Side of China

Our dream having been squashed by closed areas and tragedies, we had to think up a new route. So, we decided to head for Kunming. We were leaving the Himalayas with sadness and regret. No more beautiful high peaks for us. Only flatness. Or so we thought. 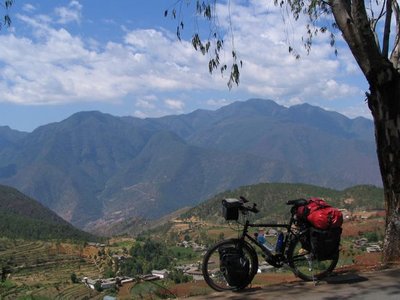 It turns out though, that China is not only really big, it is also one huge range of mountains. So, there will be no mercy for our scrawny little legs as we continue on our journey. 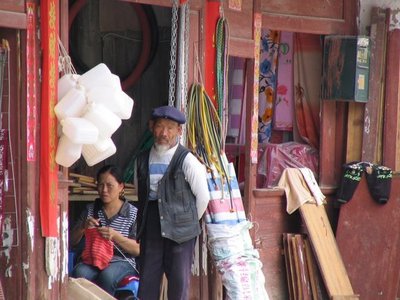 As we go more east, the Chinese people get more and more curious. Each night during our evening walks, eyes follow us down the streets, people in restaurants stop chewing, and babies point in disbelief. When we glance into shop windows, curious about what they might sell, we only see dozens of eyes staring out at us. Apparently, privacy is not a very popular concept in China. Everything is to be shared including personal emails, toilet breaks, and baggage contents. The curious must lead a rich and rewarding existence in this country. Ironically though, this does not give us much in the way of cultural exchange, being that we don't speak Chinese. They just stare at us, we just stare at them, and we are all generally amused. 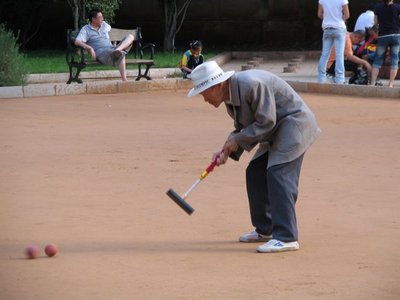 Often we take walks at night to try and find the city park for some good people watching action (yes, we do like to stare at them too). Parks are the place to be to watch Chinese people having fun. They are always busy with hundreds of activities. Old people are singing and flying kites, children are driving carts around and roller skating, and teenagers are standing around looking at each others crazy hairdos. But our favorite part of the day is when the dancing begins. There are always a few people that bring an old ghetto blaster and set themselves up on an empty spot in the park. And then a crowd draws, the music begins, and everyone breaks out in synchronized moves. One tape player will be blasting loud techno music for the teenie boppers and three meters away you have old people getting down to beat-heavy traditional music. 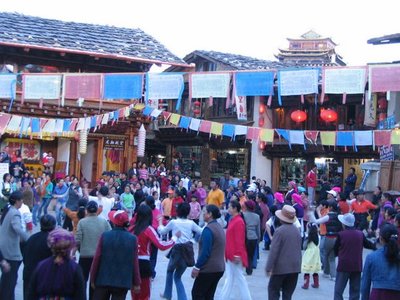 One night, two girls ask us to join in and so we timidly did, knowing that all eyes would be on us. As expected a huge crowd drew to watch the big white people dance. It was great fun, and we were sort of able to follow. After the dancing was over the huge crowd surrounded us to ask us questions. The old men had many questions that our translator refused to ask us. But they did luckily get to enquire about Wim's large nose. They also wanted to know why I had yellow hair. I thought that this was a joke until I saw that everyone was patiently waiting for an explanation. As we were leaving, a few teenage boys with sticking up hair gave us their email. They wanted a picture of our yellow hair. 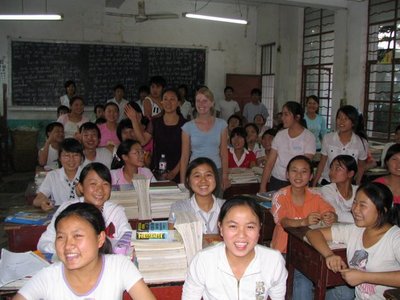 The next day we were flagged down by an English teacher at the local high school. Her colleagues had bet her 100 Yuan (10 Euro's) that she would not come talk to us. So she did and then she invited us to her class. Our mission was to convince her 75 students (who were soon to finish school and become farmers) that they should stop playing video games and dating and concentrate solely on studying English. So I made a long speech which no one understood and then the teacher made me sing for everyone. After our mission was over, class was dismissed and we all went our own way. The students and teachers sleep at the school, however during the night, everyone does their own thing. There is no one there to supervise the kids. So, we went out drinking with the teachers, which was great because we got to ask a whole lot of questions about China. And they got to learn about the West. They were particularly excited to find out that the government pays us for each extra kid that we have, whereas in China you have to pay a heavy fine and you might loose your job if you have more than one child. 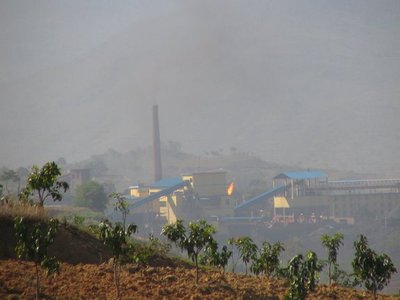 In one of the last stretches we did on our way to Kunming, we went through our first ugly part of China. From the beautiful mountains, we descended into the dark side of China, a sweltering hot coal mining/burning valley. Trucks coming out of the mines passed us every few minutes and coal burning chimneys could be seen through the thick haze. By the end of the day, we looked like two miners, our faces and boogers black like the night (and our lungs?). The city that we slept in that night was covered in a layer of soot and a putrid burning stench hung in the air. 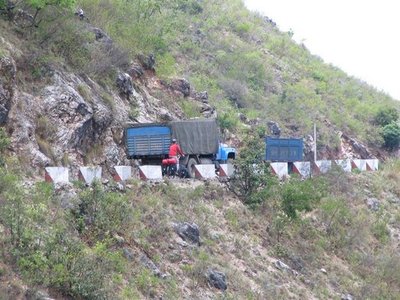 Wim holding onto a truck to cheat his way up a hill.

Luckily though, this was but for a stretch. And we are now once again basking in the startled stares and fresh air of the Yunnanese hills.

Posted by amyandwim 01:52 Archived in China

Sounds like quite the experience. I'm glad you could really talk to the people there and get an idea of life. HOpe your adventures continue to be filled with such surprises.

Incredible journey! Was there no passage South of the Sichuan area and North of Myanmar to get to your original destination in Nepal? (However, you better stay away from Myanmar as they had a catastrophe there too..., AND for other reasons!) I remember very well making a copy of a video last year for Wim, it was about a project they were going to visit there... I hope you can still get there anyway!

I have a Belgian friend of your age in Shanghai, she's got RED hair!