Land of Abundance, Home of the Panda

Billions of squinty eyed little people pushing us, shoving us, and spitting their boogers on our toes. Unintelligible Chinese characters swarming around our heads. Hoards of onlookers laughing at us as we get charged insane tourist prices. Police watching our every move. "This city is closed, no pictures, we have to confiscate your camera!" Who can we ask, where do we go, how can we function in such an alien country? Dry cabbage and dog for breakfast, lunch and dinner, stinky hotels and community toilets. Wim and Amy... two little fish lost in a big scary Chinese pond. Or at least that is what we expected...

This is what we found: 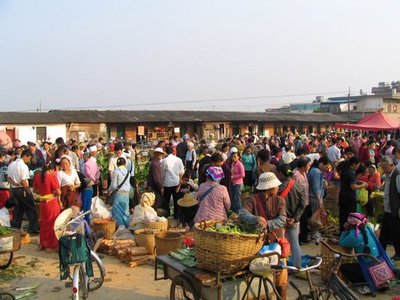 We had just stepped out of Laos, the land of sticky rice and bamboo huts, and we had stepped into a shocking world of stores that sell things, people with jobs, kids going to school, and shiney advertisments strewn along the street. Speechlessly, we wandered through the streets. Was all this extravagance good or did we miss the simplicity of life in Laos? We were torn... until we found the restaurants... and the adundant snack-cart ladies. Extravagance? No way, we deserved this! That night, despite our fatigue, Wim dragged me through the streets buying every snack available. Imagine all the modern conveniences and abundance of Germany... at a 95% discount. We were in the land of milk and honey! 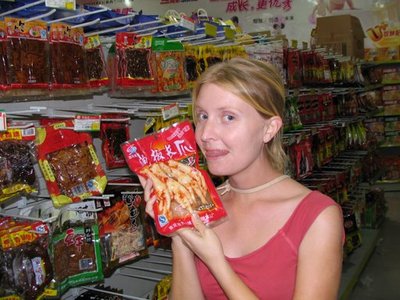 (pre-packaged chicken feet... a luxury you just can't find this in Laos!)

China is developing at an amazing rate. While our countries slowly developed over four generations, China exploded into modernity over a period of only ten years. Many of the cities we visit have grown much faster than its inhabitants could cope with. Thus a walk through the city reveals a strange balance between old and new, rich and poor, traditional and modern: 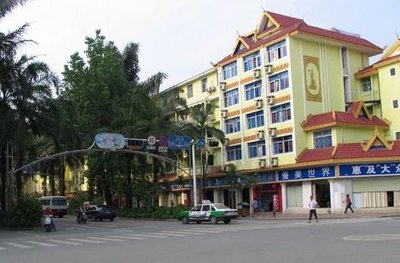 Western clothing, perfumes and the latest cellphones are all prettily displayed in store windows. Parks, fountains, and bike paths are all laid out to create a sense of order and calm that is missing in much of the world's big cities. On these same streets, women from the surrounding hills, dressed in colourful traditional clothing squat down next to their vegetables, hoping for a sale. 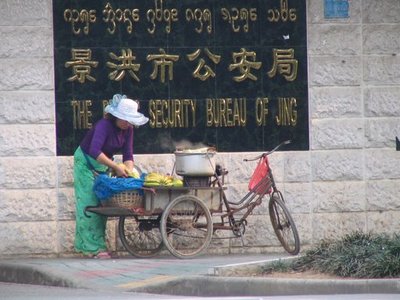 Store owners wives are washing their clothes in buckets outside their fancy store fronts. Toddlers are taking care of thier morning business in the gutter. Distorted techno music blasts through store speakers and puppies play chicken with oncoming traffic. Giant internet cafes show off the newest hardware and the oldest plumbing (community toilets: a 4 meter long ditch, where you put one leg on each side, and squat together with 7 other "community members"). Throughout the day, people fill the streets, playing cards, eating, doing tai chi, pushing snack carts, walking their bird cages... 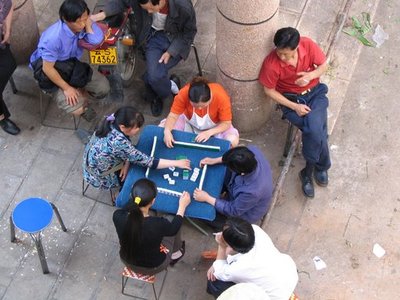 Everyone stares intently as we walk down the streets. They are probably thinking, "Wow, look at their big noses." But as soon as we sit down somewere, the astonishment is put aside and everyone is eager to help us. We point, do some quick gestures, and everyone knows exactly what we mean. These people are clever! They are also welcoming and quick to give us a big smile. Best of all, we don't have to share our friendly Chinese people with any other tourists! 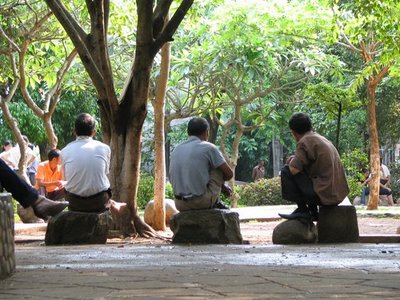 To our suprise, the hills of northern Laos didn't stop at the border. So, we have spent our last weeks biking up the even bigger hills of China, with varying road conditions along the way. 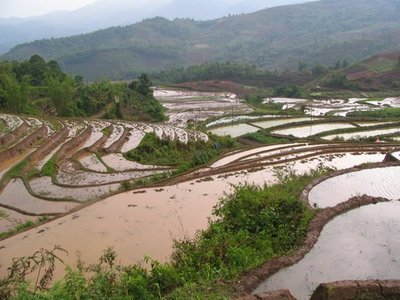 Road construction is happening all over the place. For 200km, we biked along a closed section of unfinished highway that tunnels through the hills and bridges over wide canyons, all the while laughing at the thought of taking the old road that goes over the hills. The road workers didn't seem to mind that we were there and we even convinced a building team to let us through a 4km unfinished tunnel going through the heart of a gigantic mountian. 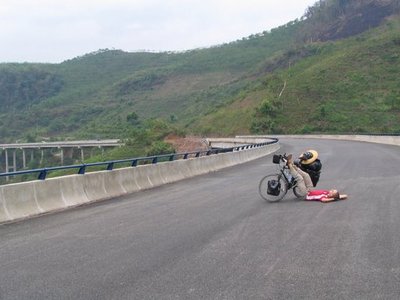 The next 400km however, were cobblestone roads, landslides and headaches.

Through our last weeks, we've been enjoying the biking as much as we have the cities. As we bike through the countryside, we creep up hills at 5km per hour, urged on by the beautiful scenery and the thought of the nearing Himalayas. All the land around us (that is not vertical) is being worked by colourful farmers. Road workers wave and invite us for rice as we bike past, and truckers give us a thumbs up and a smile.

We are now out to find ourselves some hairy yak clothes to keep us warm as we attempt to pedal ourselves over the Himalayas!

Posted by amyandwim 03:51 Archived in China

You made it into China! Congratulations! You guys are really amazing to have the courage to continue, especially after your scary experience in Laos!

This entire journal is outstanding ~ must-read stuff. Can't wait for the next entry.

Hello
Not only the courageous continuation of your trip is great, Amy's writing style too is of a sort to be proud on. Catchy and fluently written. Have you ever thought of writing a book? Maybe that could be your next challenge once back home.

You did it!! You did it!! I never doubted you for a minute... well- sort of, the hospitalizations kind of freaked me out. But now your there and heading to the himalayas... WOW you can go home completly glorified. So ... do you have an end date planned yet or a plan for a way home plotted out? Just something to think about... soon. Love- take care.

I was just talking about you two yesterday when my friend was talking about the incredible pace of change there in China and how it frightens her. And I said I would let her know what you guys think. I'm so happy chicken feet are abundant. Enjoy yourselves in your well earned convenience! Good luck in the mountains too!

I hope you will sign in soon and say that you sustained no injuries.

I think that now we all hope that all's alright...

Just to let everyone know that after the initial earthquake, we received an e-mail saying that they are all right, but that they had to turn back, as the police sent them away from the affected region.

NOT TO WORRY BLOGGERS. Amy and Wim are alive and well and south of the horrible earthquake. As I understand it, they were not allowed entry into the province just inside of the day the earthquake occured-- WHEW RIGHT?!! They are now tring to make it up a mountain and will blog as soon as they get longer internet access.
Peace.

thanks go to bieke and wohalibean.